As a preamble, people who have talked to me lately know that since I got a ukulele in August I've been weirdly obsessed. Especially the last month or so I've been playing a ridiculous amount, staying up super late at night playing, so much that whenever someone asks what I've been up to lately I can't think of anything else to say and I'm all "Ummmm... I don't know......... er ukulele?" I can't even completely explain why, I've had a guitar around the house for the last dozen years and it's never been something I bothered to play too much. Possibly something in my brain can handle exactly four strings before it snaps, so if you add a fifth string (or heaven forfend a sixth) I just never take the instrument out of its case. Although all my other stringed instruments (yeah "all"... I have a problem...) are languishing as well.

Anyway, up until now I've only learned how to strum with my index finger but I ran across this video today, which is educational if slow paced. If you go to the beginning, he also shows how to make a couple common ukulele chords in pretty painstaking detail.

I've been trying to practice thumb strumming tonight. It's a little frustrating when I'm used to using my index finger, I'm having trouble not making a loud click on the upstroke and it makes me distracted by what my right hand is doing more than normal, but I like that it makes a different sound for variety. I also like that it coddles my index finger, which I've banged up a little in my excessively enthusiastic strums.

There's a metric crapton of ukulele tutorial videos out there because of how trendy it is now*, but many of them don't seem to be that useful. I'll try to link the ones I like here.

The first instructional strumming video I watched was this one but I got about a minute into it and ended up just being like this :-o and deciding to ignore it until I had more skills. It's a great video though. If you are some kind of wizard.

* which is probably the only reason I'm playing it too, I'm a trend follower!

Back on teh intertubes

About two years ago, emilythink.org had to switch hosting setups, and I promptly and industriously put all the content of the humorous triathlon blog I was writing back up on a new site I set up when I reregistered the domain.

Haha no not really. In real life, the blog's content is in a mysql database somewhere on some server that I downloaded it to—or maybe on a laptop?—and if I were organized I would know where. Having discovered that I'm definitely too lazy to have set up reasonable hosting, found the archive, and re-imported it to wordpress, two years later I have finally decided to go with the "in the cloud" blog. 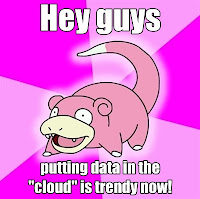 If I ever find the content again, I might hand-import those articles so they aren't lost forever. It seems like the wayback machine doesn't have a record of it like it has (if unevenly) for the last emilythink incarnation, which itself was lost in another domain renewal procrastrophe.